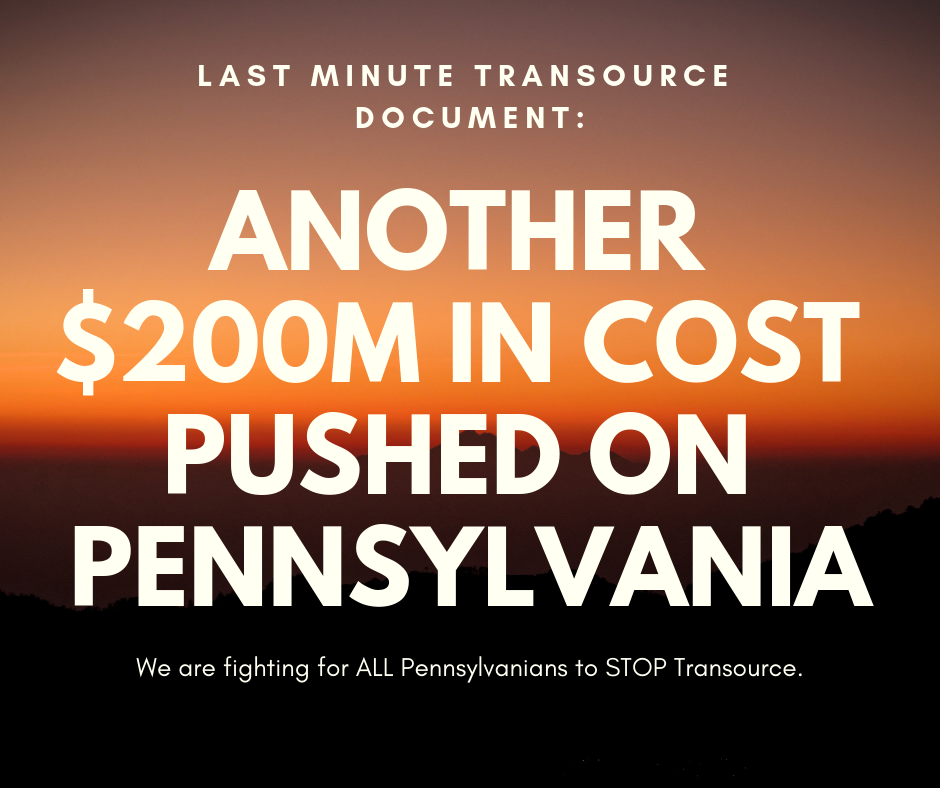 Get the REAL numbers behind Transource’s IEC Energy Project:

“Office of Consumer Advocate estimates the net effect to PA to be $514M in increased wholesale electricity prices.”

“In their rush to introduce a new benefit for the IEC, Transource admitted the attached spreadsheet into the public domain.  It clearly shows how PJM zones were excluded from the analysis.  All of the zones with positive (black) numbers in column B are omitted from the calculation of benefits that happens in column C.  This includes PA zones PECO, METED, PLGRP and PENELEC.   Part of the APS zone is in Pennsylvania, as well as DUQ, so with those zones prorated, the Office of Consumer Advocate estimates the net effect to PA to be $514M in increased wholesale electricity prices.”

Your electric bill is about to go up – If the IEC Powerline project is approved, pennsylvania and delmarva electric customers will pay more.

The Transource Powerline project keeps getting worse. Now it has come to light with testimony from the Office of Consumer Advocate that ALL Pennsylvania electric customers will pay MORE for electric power, because this system is designed to get power to the Washington D.C.  area. The law of supply and demand dictates that if more power leaves PA, prices will go up.
How much? The Pennsylvania Consumer Advocate estimates rates will increase by $367 Million over the next 15 years for YOU! EVERY Citizen who pays for electric can protest RIGHT NOW within TWO MINUTES.
CLICK HERE: Get Fact Sheet on Transource IEC Financials.

In a surprise move at hearings in Harrisburg on Friday, Transource Pennsylvania LLC was forced to reveal new estimates of the financial impact of their two new proposed high voltage lines through York and Franklin counties (IEC).  The new figures raise the projected electrical rate increase in Pennsylvania rates from $350M to over $500M (NPV over 15 years).

Transource took the highly unusual move of introducing new evidence at the last minute possible hoping that new rules approved by FERC would improve the evaluation of the project. Regional grid operator PJM reran simulations with the new rules and found that the projected drain of power from Pennsylvania to the Washington DC market had increased.  The new simulation projects $982M in electrical cost reductions for the DC market, but $969M in increases elsewhere, including over $514M in electric rate cost increases in Pennsylvania alone.

Citizens to Stop Transource VP Barron Shaw stated: “Transource doubled-down on their bet that Pennsylvania would approve a project that effectively drains low-priced electricity from Pennsylvania in order to subsidize the wealthiest counties in the nation.  This project was bad before, and it is even worse now.  The PUC would be nuts to approve this project.”

The new data also highlighted how PJM rules have been manipulated to score the project.  While Transource has been claiming $700, $800, and $900 million in future savings, the new data shows how PJM has ignored price increases and only looked at price decreases.  The attached spreadsheet was submitted into evidence and is now publicly available.  It shows how PJM ignores rate increases to derive its new rate savings number.

If all benefits and costs were to be included, the total benefit of the project would be negative $439M NPV over the next 15 years.  The Office of the Consumer Advocate (OCA), a state agency charged with protecting Pennsylvania ratepayers sees the case as precedent-setting, and has called for a rejection of the project “with prejudice.”

Citizens to Stop Transource calls on the PUC to move quickly to protect the citizens of Pennsylvania and reject the Independence Energy Connection.

Citizens to STOP Transource is an official 501c4 community organization dedicated to stopping the approval of this needless power line project. We are a group of residents here to help YOU, the landowners and community members, be heard in the process.
Transource is attempting to take a Right of Way across farmland for power lines and towers through eminent domain. That means that Transource could build the 13-story (over 130-feet-tall) towers through the unspoiled countryside against landowners’ will. This eye-sore will be here forever, and is not needed because there is an existing high-power line that could be used.
We need all members of the community to stand together and defend this beautiful section of rural America. Join the cause now by choosing from the buttons below.
Landowners, Join!
Citizens, Join!